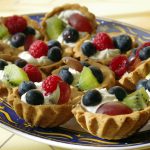 This Recipe For THC Blueberry Muffin Cake Is Super Simple

Combining beloved culinary elements to create one epic dish is one of the coolest things about food, in general. Somehow, some way, these kitchen geniuses are able to construct a truly delectable dish, simply by blending together components that everyone knows and loves. And this THC Blueberry Muffin Cake is a perfect example of just such a feast-related feat.I truly cannot think of a more deliciously dank way to start the day, than with a fresh slice of this THC Blueberry Muffin Cake. But, while it's a phenomenal way to kick off a morning, it can just as easily be enjoyed as a cannabis-infused “night-cap” to help send you off into a peaceful, much-deserved slumber. Just like a good edible should.

And that, ladies and gentleman, is how you make THC Blueberry Muffin Cake from scratch like an absolute pro. Your friends will be blown away by the culinary prowess displayed in such an infused creation. It tastes great, smells fantastic, and delivers a serene series of therapeutic effects. In short, it’s a perfect edible.